Sizing Up Big Data – And Finding the Next Information Advantage

Whether you’re a technology enthusiast or novice, it’s impossible to refute that we’re living in an increasingly digital world. Zoom calls. Social media. Smart devices. Your favorite streaming network. They all operate off – and contribute to – our ever-growing collection of data.

The term “big data” is used so frequently, the full meaning of it often gets overlooked. How much data is out there? And more importantly, what impact does big data have on your investment strategy and wealth?

A brief history of big data.

The origins of “big data” are somewhat debatable, as the expression was used in various forms before arriving at its current meaning. Mentions of big data can be traced back to 1980, but many credit the first modern usage to Tim O’Reilly in his 2005 book, What is Web 2.0? As the concept took hold, “Big Data” entered the Oxford English Dictionary in 2013.

Before we talk about the magnitude of data, it’s important to understand how it’s measured. Digital information is based on bits (b) and bytes (B) (typically made up of eight bits). The widely accepted International System of Units (SI) is based on powers of 10. For instance, 1,000 B is called a kilobyte (kB). 1,000 KBs are called a megabyte (MB), and so forth. 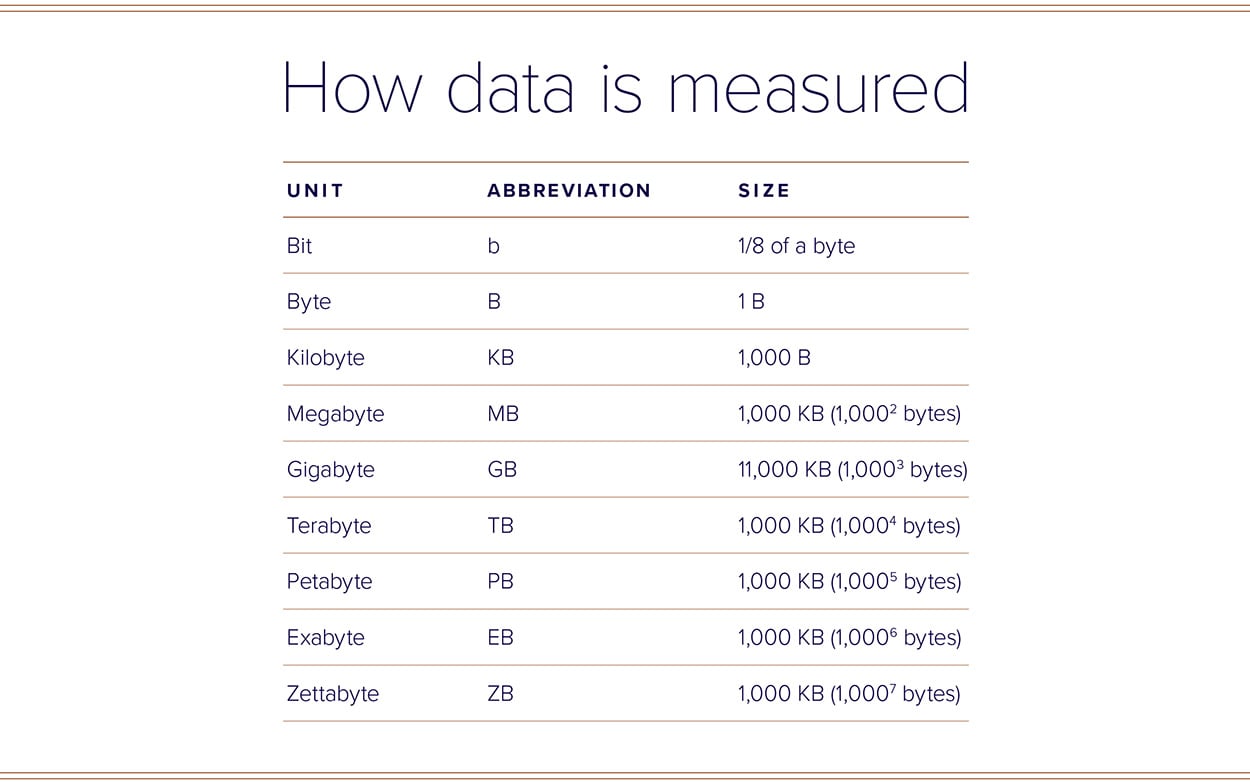 On a micro-level, we have all witnessed the proliferation of data through the evolution of our electronic devices. If we think back to our early personal computers in the 1990s and early 2000s, hard drive storage was measured in hundreds of megabytes or a few gigabytes. Fast forward to 2021, and the latest iPhone is available with 512 GB of storage, and external hard drives with multiple terabytes can be purchase at modest prices. Cloud computing has further commoditized data by providing instant, scalable storage volumes through an internet connection.

On a broader scale, the amount of data produced has increased exponentially over the past few decades and continues to reach nearly incomprehensible levels. Around 2013, a report concluded that “90% of all the data in the world has been generated over the last two years.” This claim was based on the production of 2.5 quintillion bytes a day; however, these staggering numbers are already obsolete.

The data universe has become so immense that new terminology had to be created to accommodate the growth. The Zettabyte Era refers to the period when the total volume of data is measured by zettabyte (ZB), which is the equivalent of 1 billion terabytes. Roughly 20 years after the internet became mainstream, we crossed the threshold into the Zettabyte Era around 2012. Just a year later, an estimated 4.4 ZB existed of data— and by 2020, that figure was expected to surge to 44 ZB. At our current trajectory, the global datasphere is forecasted to reach 175 ZB by 2025.

For a moment, let’s consider how massive 44 ZB truly is. To put it in some perspective, the World Economic Forum website states, “If this number is correct, it will mean there are 40 times more bytes than there are stars in the observable universe.”

When assessing the impact of Big Data, we must consider the quantity of information as well as the speed at which it travels.

In the early days of the internet, a dial-up connection maxed out at 56 KB per second. Today’s broadband internet connections are capable of transmitting hundreds of megabits per second (Mbsp). Wireless technology has already revolutionized our data creation and consumption, and networks continue to advance. The expansion of 5G (standing for 5th generation) could be 20X faster than 4G, capable of making 100MB mobile speeds standard, with potential for up to 20GB per second.

Internationally, data speed has become an arms race. You may be surprised to know that, according to Speedtest.net, the United States ranks 10th globally in average broadband speed (173 Mbps) and 20th in mobile data speed (67 Mbps). China and other developing countries in Southeast Asia have invested in their information technology infrastructure, and currently have broadband and mobile speeds that rival or exceed developed countries, which could accelerate economic growth.

Snapshot of daily use.

According to some estimates, the average person accounts for 1.7 MB of data per second, which comes out to over 146 GBs per day. The majority (but not all) of this data use can be attributed to our daily internet usage. The following illustrates the many sources from which we consume or produce data. 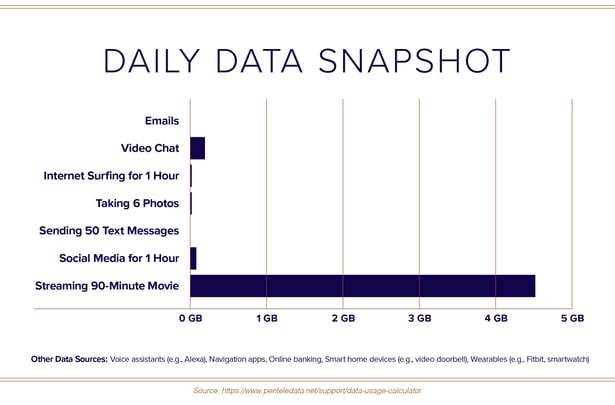 How is this data being used?

Big data on its own isn’t entirely useful. However, it does serve as the fuel for a host of technologies and approaches that lead to innovative outcomes. Here are just a few examples of how information is being harnessed.

What does this mean for investors?

The emergence of big data and analytical tools has revolutionized the investing landscape. While opportunities are plentiful, there are downsides and risks to be aware of.

The convergence of financial technology and the democratization of information has led to a dramatic rise in retail investors.  Start-ups such as Robinhood, Acorns, Webull, Betterment, and SoFi offer no- or low-cost trading of stocks, cryptocurrencies, and more. These companies, along with their mobile apps, have provided a gateway for millions of new investors. Novel products such as fractional share investing (which allows an investor to buy a partial share of a company) and robo-investing (automated portfolios constructed by algorithms) have also made the markets more accessible. A new pool of investors is a welcome effect, as our country at large struggles with retirement savings and planning; however, their trading activity is much less based on fundamentals and may produce dramatic results as it did with Gamestop.

While the vast quantity of investing information available is unquestionable, the quality of it certainly can be. To paraphrase a common idiom, not all data is good data. With today’s technology, the barrier to entry for publishing content is incredibly low. Just about anyone these days can start a website or video channel devoted to market updates and recommendations. In search of content and clicks, even traditional news outlets can share poorly developed data and misleading conclusions. This all means that credible sources are harder to come by, and you should take a critical look at any information before using it to inform investment choices.

As advisers, we too recognize the double-edge-sword nature of big data. On the one hand, we appreciate having more information and smarter tools available for our research. On the other hand, sifting through the mountain of data to find credible, actionable insight is a time-consuming endeavor.

With open access to real-time data and more players in the market, the information advantage that experienced investors have long enjoyed is quickly evolving. Therefore, we must explore alternative opportunities with less saturation – such as private markets.

Unlike publicly traded companies, private companies are not required to disclose financial information. While data within private equity is less abundant, it can also be more valuable. Due to the nature of how private companies are acquired and how equity holders are compensated, PE appeals to a much smaller investor pool than the public markets. PE also presents an elevated “human advantage,” with the manager having a more direct influence on a private company’s success than a public one.

There’s no question that the exponential growth of data will continue to accelerate. It’s only a matter of time until we outgrow the Zettabyte Era and reach the next data milestone – the yottabyte.

As investors, we must understand the evolution of information and technology, and adjust how we seek advantages and opportunities. At the same time, we must remember that big data is just a tool (albeit a powerful one), and that human judgment and personal insights can never be entirely replaced.

At Sanderson we're committed to staying on the leading edge of technology and investment trends, while staying true to the fundamentals of the investments we recommend.  If you’re interested in learning more about our newest investment opportunities and how information advantage may be utilized in these opportunities, talk to your adviser or contact Sanderson for a consultation.