Gaming the System – Breaking Down the GameStop Saga

In the final week of January 2021, Wall Street was cast into the mainstream spotlight in truth-is-stranger-than-fiction fashion. We witnessed an internet revolt leading to an investing version of David versus Goliath. There was unprecedented trading volume, with investors gaining (and losing) millions of dollars a day. Celebrities stoked the flames on social media. And at the center of the controversy? GameStop, a struggling video game retailer.

With so much drama, it should be no surprise that multiple documentaries and movies are already in the pipeline. However, this Hollywood-esque story has real-life consequences, and we caution our clients from getting caught up in the excitement surrounding speculative investing.

Considering the media frenzy over the GameStop saga, we won’t go into all the details (if you’re inclined, you can read a more in-depth report). But here’s the gist of what happened.

It all started on Reddit, which is the seventh-largest website in the U.S. and has millions of forum communities (called subreddits) devoted to nearly any topic you can imagine. One subreddit, entitled WallStreetBets, discusses investment tips and ideas—often involving speculative “meme stocks.” One contributor noticed that certain institutional investors, including certain hedge funds, were heavily short-selling GameStop (GME) stock.

In basic terms, short selling is the strategy of betting that a stock’s price will go down over a certain period. Investor A borrows shares from Investor B, then sells them to Investor C. Later, Investor A hopes to buy back the number of shares at a lower price, allowing them to pocket the difference.

The WallStreetBets community saw an opportunity to band together and purchase large amounts of GameStop stock. This activity caused the stock price to spike, meaning short sellers would eventually have to pay significantly more for their borrowed shares, resulting in a massive loss. As word got out, more retail investors joined the short squeeze, further increasing GME’s price – up to a peak of $347.51 from its typical $10-20 range. 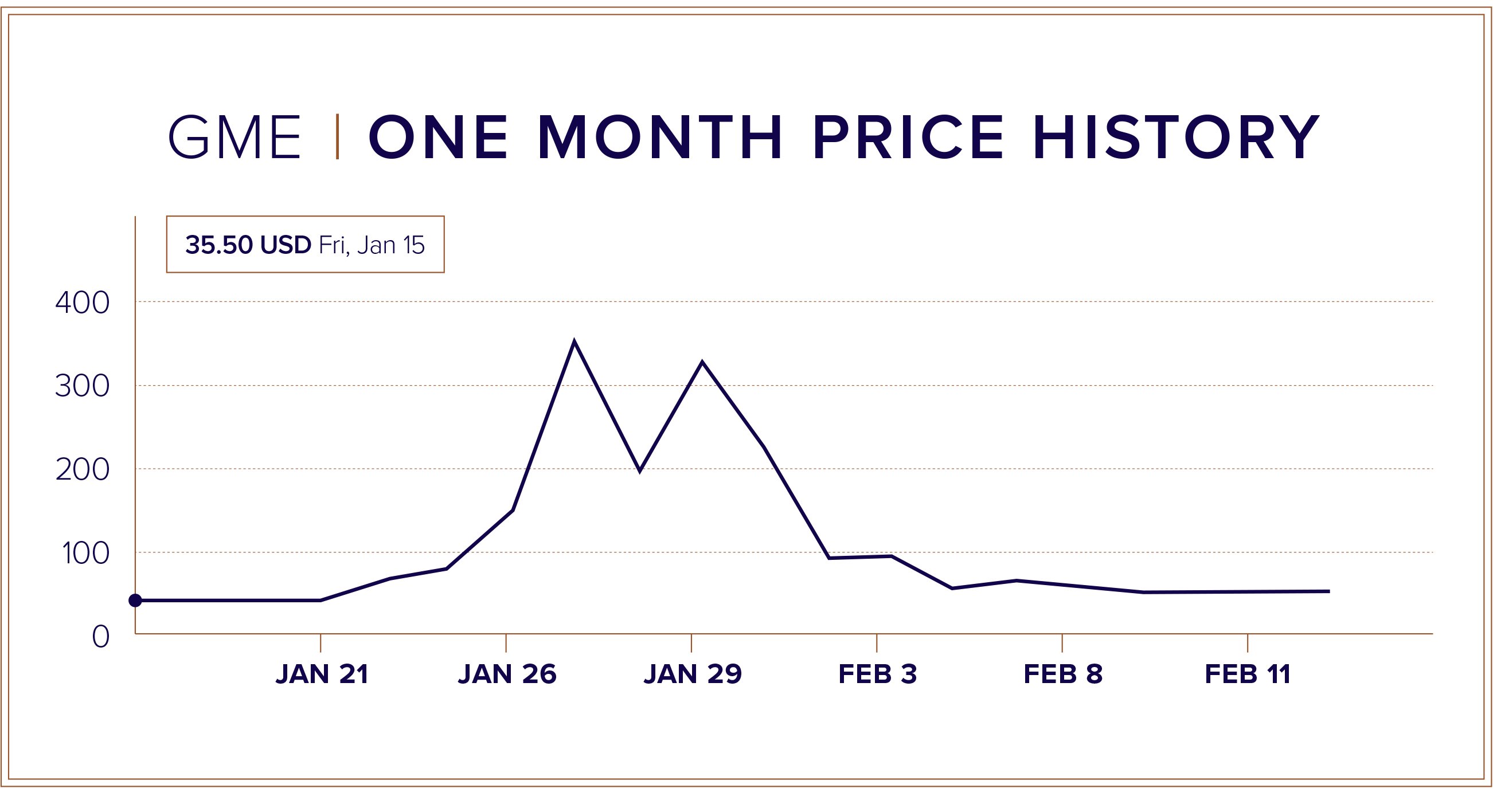 The internet community delighted not only in the prospects of getting rich quick but also in taking down the “Wall Street elite” in the process. While GameStop was the main target, the price-surging blitz included other heavily shorted stocks such as AMC, BlackBerry, and Nokia, among others. Gasoline was poured on the fire when Robinhood and other no-fee brokerage services limited or halted the trading of GameStop and other volatile companies. While conspiracy theories ran rampant, there were logistical and financial explanations for these drastic actions.

As the dust settles, many are wondering what the fallout of the GameStop story may be. Does it indicate a shifting power in the markets? Will the volatile events lead to tighter regulations on short selling and options trading? Or will an investor classification be necessary to buy derivatives in the future? Anything is possible. But in our opinion, this saga will be a blip on the radar, except for those who lost big after joining the fray too late.

First off, the dramatic events will likely not change the destiny of GameStop, which is operating with an antiquated brick-and-mortar retail model at a time when the majority of video games are digitally downloaded. These, along with the impacts of COVID-19, are what made GME so appealing for short selling to begin with.

Another truth is that retail investing has skyrocketed over the past few years—a trend that will likely continue. We now know that a large group of decentralized investors can move a small portion of the market. In this case, however, the group was not operating on the fundamentals of investing—in other words, they didn’t believe in the company’s long-term success. Instead, they attacked the mechanics of the market. During the torrent of activity, more shares of GameStop were borrowed and sold than shares that actually existed.

GameStop investors engaged in speculative investing and attacking the mechanics of the market—not fundamental investing that delivers long-term results.

There’s also the popular narrative (or more likely, misconception) of David conquering Goliath. However, the large institutional investors that were in the headlines for early losses also had the resources and know-how to defend their positions and possibly capitalize on the frenzy themselves. Time will tell how truly devastating the squeeze was on the professional investors.

In speculative investing, there are winners but also many losers. Overall, the GameStop play closely resembled a Ponzi scheme. Investors who got in early enjoyed massive gains, while those late to the party were left holding the proverbial bag. Media outlets and social media are quick to report on the individuals who walked away with thousands (or even millions) in just a few days. But the untold stories are the ones of investors who bought near the peak and took massive losses as GME (and other stocks) predictably came crashing back down to earth.

The importance of prudent investing.

At Sanderson, we strongly believe in fundamental investing. We believe an investment’s worth should be based on earnings, cash flow, growth rates, and the value of any underlying assets. We aim to make objective decisions based on beliefs of the future success of a company or asset class. While we engage with many fund managers, our clients can rest easy knowing we have zero ties to the investment managers entangled in the GameStop scenario. In fact, we do not endorse black box or blind shorting strategies that are incredibly risky and unsustainable.

Our clients entrust us to protect their life’s work and grow their wealth long-term – even for multiple generations. When the stakes are that high, we believe that speculative investing is not a game worth playing.