Tax Turbulence: A Perfect Storm of Pandemic and Politics

A perfect storm is brewing. A contentious election is underway, federal and state deficits are expanding rapidly due to COVID-19, and generous tax laws are scheduled to end after 2025. The result? We could see some dramatic tax increases in the not-too-distant future. Many financial advisers, Sanderson Wealth Management included, believe that it is not a matter of if income taxes will increase, but when.

The Potential Tax Impact of a Biden Victory.

Democrats have long been critical of Trump’s tax policies, particularly the Tax Cuts and Jobs Act of 2017 (TCJA), which reversed many Obama-era tax policies. While not completely reversing TCJA, Biden’s tax plan generally raises taxes on corporations and individual taxpayers earning $400,000+ per year, while increasing tax credits for low- and middle-income taxpayers.

Here’s a breakdown of Biden’s plan for individual taxpayers.

The nonpartisan Tax Foundation has analyzed the effects of Biden’s tax plan over the next decade. We expect reductions in GDP of about -1.47%, while federal tax revenues would increase by roughly $3.05T. Their analysis also indicates that the top 1% of taxpayers (generally defined as those with AGI over $515K) would see their after-tax income drop by 9.9% in 2021, while the next 5% would decrease by a more modest 1.3%. On the other end of the spectrum, the bottom 20% would see an increase of 10.8% and the next 20% would see an increase of 3.6%. For context, taxpayers with AGI below $42K generally fall in the bottom 50%.

No matter how the election goes, federal revenue deficits are already a reality. Whether driven by COVID-19 expenditures and losses, or the cumulative impact of the TCJA provisions over the past few years, the CBO expects federal debt to balloon to well over 100% of GDP in coming years. 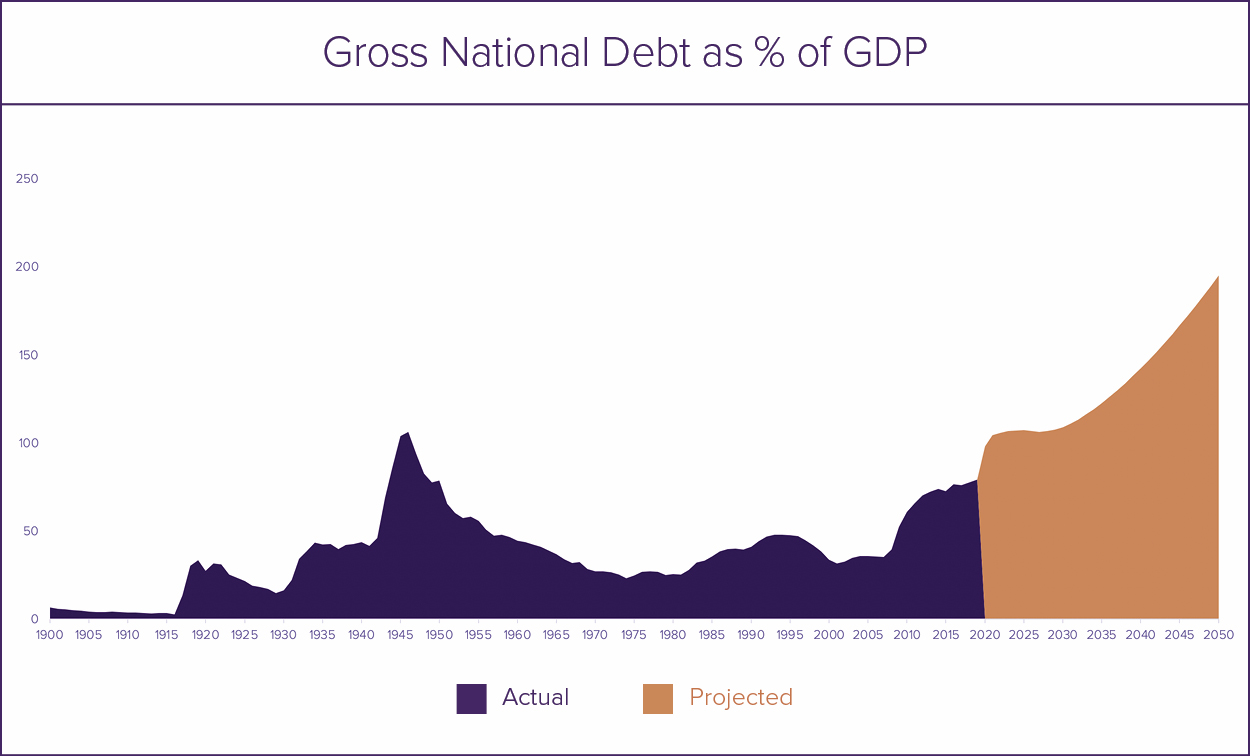 This gap will have to be filled in part through increased tax revenues, regardless of which party is in power. Wealthy taxpayers should expect their tax burden to increase, whether that’s through some of the proposals noted above or variations of them.

State tax coffers are also severely strained. The National Conference of State Legislatures projects that states such as California and New Jersey could see a greater than 20% drop in fiscal year 2021 revenue. States with large deficits will doubtless look to their residents (and perhaps shifty nonresidents) to partially plug the hole in their budgets. Still grappling with their initial COVID-19 response, very few state governments have released specific tax plans or proposals. As the books close on 2020 and state governments start looking to 2021, expect to see state tax increases in the headlines.

Cuts Come to an End.

The Tax Cuts and Jobs Act that went into effect on January 1, 2018 provided vast tax cuts – but only temporarily. Almost all of the tax cuts pertaining to individuals and estates are scheduled to end after 2025, reverting back to Obama-era policies. Unless the TCJA provisions are extended, wealthy taxpayers will see a dramatic increase in their 2026 tax liabilities.

That said, we’re likely to see a new tax bill enacted before the TJCA expires. Every few years, the president and Congress address current economic conditions through tax reform. The COVID-19 fiscal crisis will be no different. What that new tax bill will look like is anyone’s guess!

So, What Should I Do?

Income and estate taxes appear to be on their way up in the coming years. Be mindful of the impact of higher tax rates in the next five to seven years on deferred income and retirement draws. Depending on the election results and events of the coming months, it may make sense to recognize income today rather than defer it into the future. At SWM our tax team works with our clients to model the impact of potential changes in taxes, in an attempt to maximize tax efficiency. We urge everyone to do the same.