Rational Thinking: Taking the Emotion Out of Investing Eugene Fama, best known for his work on portfolio theory, asset pricing, and the efficient-market hypothesis, is referencing behavioral finance, the study of the effects of psychology on investors and financial markets. It focuses on explaining why investors often appear to lack selfcontrol, act against their own best interest, and make decisions based on personal biases instead of facts.

The human brain is an impressive and complex organ that digests and processes emotions first and logic second. Have you ever been so angry that you couldn’t think straight? That’s because our brains process emotions 3.5 times faster than logical thinking. It’s the emotional triggers, such as feelings, personal beliefs, stress, and past experiences, that tend to cause investors to make decisions without rational thought, including:

The simple concept of overvaluing more recent information over historical information. For example, how many people would go for a swim in the ocean after watching Jaws? The reality is that the odds of a shark attack are extremely low, but most people would elect not to go for a swim. What we have seen most recently affects our decision-making more than anything else.

A cognitive bias wherein an individual chooses to perceive information based on how it’s presented to us. When looking for a disinfectant (especially given today’s environment), would you choose a product that kills 95% of bacteria or one that lets 5% of germs survive? Typically, in an up-market, our tolerance for loss increases, whereas in a down market, that same tolerance decreases.

The bandwagon effect is the tendency for people to make decisions based on the fact that others are doing so. There’s arguably no better example than the dot-com bubble of the 1990s, where companies began to pop up with nothing more than a name (attached with a .com or .net) that attracted large investment dollars, simply because of how popular those companies were at the time. If you see a restaurant that’s packed vs. a restaurant that’s completely empty, most people would lean toward the busy restaurant because of the perception that it’s better. However, what if all the people in that restaurant were hired actors paid to sit there; does that change where you’d eat?

Keeping your eyes on the prize.

Imagine if you had to drive from New York City to Los Angeles. You are in the middle of downtown Manhattan and stuck in rush-hour traffic. People on bicycles are whizzing past you, so you decide to jump out of your car, sell it on the spot at a ridiculously low price so you can buy a bike, and then you start pedaling toward the west coast. As absurd as that may sound, investors do it every day when they make short-term decisions for long-term journeys. Sticking with a sound philosophy will take you to the end of the road, and that’s our job as advisers to keep you focused on your destination and not on the bumps in the road. 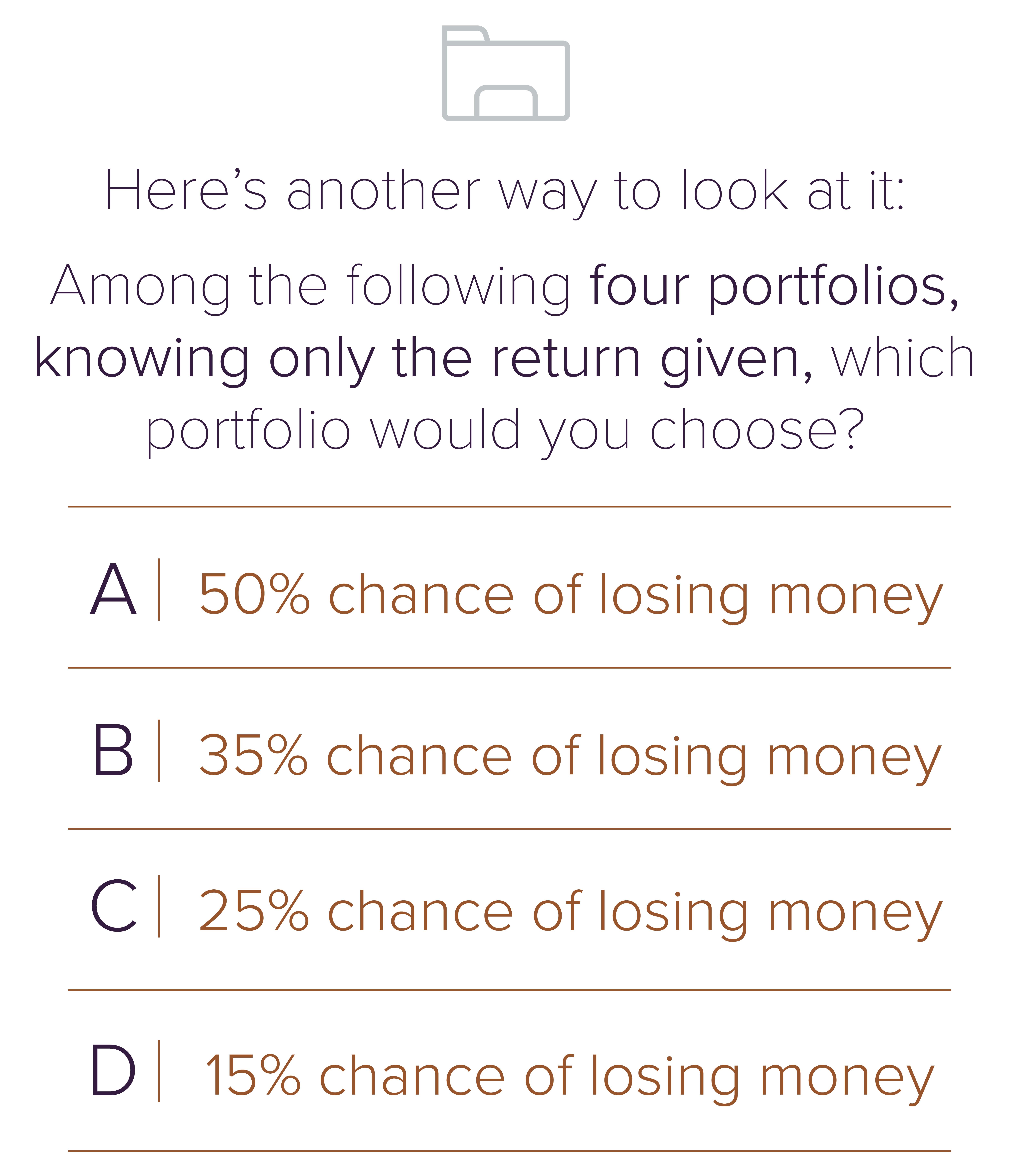 Truth be told, all four of the portfolios were invested exactly the same way. It’s hard for the average investor to not look daily; it’s in our DNA to want to look. The point of emphasis here is that the market will experience ups and downs, but we should be focused on the long-term time horizon, not what the market did yesterday, today, or what it will do tomorrow.

To further emphasize the concept of perception, look at the following chart. It is the exact same data, presented in two different ways. The top chart shows monthly returns for the S&P 500 from 1926-2020, whereas the bottom chart shows how $100 has grown annually in that same time frame. Clearly, one shows the reality of the ups and downs of the market, highlighting volatility; the other shows a nice smooth, gradual increase that most investors would prefer to think of and look at. When presented with information in a way that’s clear to understand and easily digestible, it makes sifting through market complexities a much easier task.

Make decisions that pay off.

We cannot predict markets. In 2008, major investment firms across the U.S. predicted record gains for the year. We all know what happened, proving that we do not hold the power to predict the future, especially in the stock market. We know there will be downturns in the market, so it’s important to make sure we don’t overreact to those times and stay focused on our long-term financial goals. It’s easy to become nervous when things go bad, but it’s our job as advisers to do the necessary handholding to provide the guidance to get you through those tough times, keep you on track, and stick to your financial plan that was initially made with a rational, clear mind.