Eye of the storm.

Volatility flooded the financial markets in the month of September. Big rate hikes, a surging dollar, and continued inflation all contributed to the storm in stocks, bonds, and commodities. It should be no surprise that investor sentiment is at a historically poor level. It may, however, be a surprise as to why this could be a positive sign.

The Federal Reserve aggressively raised rates an additional 0.75% at their September meeting, bringing the Federal Funds rate to 3.25%. They continued to signal that they will stay the course on raising rates to attack inflation. This comes as the Fed’s preferred gauge of inflation, the PCE, showed stronger than expected inflation even with the sharp declines in gas prices.

US stocks were down over 9% in September, finishing below the mid-June lows for the year. In fact, this marks the end of the third consecutive negative quarter for the S&P 500—a streak not seen since 2009. There was no hiding in the bond market as the 10-year treasury rate topped 4% during the month, driving bond prices lower by 4.7%. Commodities such as energy, metals, and grains were down over 8% in part due to a strong dollar.

Waves of rising interest rates have continued to swell the value of the US dollar. The dollar index—a measure of the value of one US dollar—rose 2.3% in September alone. This brings the year-to-date move to +17.25%. For context, currencies are measured in pairs, and the British pound relative to the US dollar fell to its lowest level on record. This is partially due to a spending and tax cut plan proposed by the British government. The Euro even reached parity with the dollar for the first time since 2002.

Sentiment and seasonality: A dose of optimism.

According to a popular survey, investor sentiment is the lowest it’s been since the global financial crisis. The last time sentiment hit these levels, the S&P 500 rallied over 30% the following year. This shows that when the outlook for corporate earnings and the economy are poor—and the market is already down—signs of improvement may send stocks surging higher.

Another positive outlook is the seasonal trend of strong returns in the month of October, particularly in midterm election years. October has been referred to as the “bear market killer” referring to the historical turnaround seen in markets coming out of a weak September. In fact, twelve post-WWII bear markets have ended in October! In addition, Q4 of midterm election years and the subsequent Q1 tend to be strong.

The market has endured a tough year and it is likely there may be additional storm clouds on the horizon. As portfolio managers, we have various buoys built into portfolios such as hedging strategies and private investments to hold onto in times of uncertainty. We also remain invested with high-quality, active equity managers that can navigate to areas of opportunity in the market. At Sanderson, we have endured many market cycles before and will continue to navigate through this to the other side. 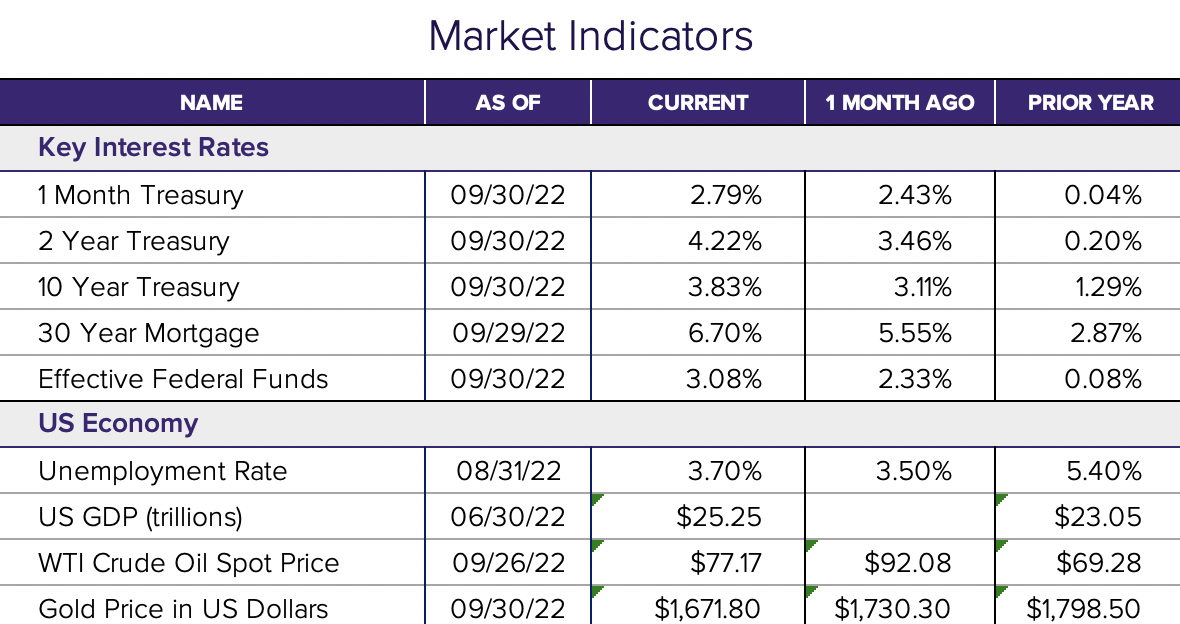