The devil is in the details.

After two months of market declines, stocks posted a strong gain in October despite continued inflation, weaker earnings growth, and expectations of continued rate hikes by the Fed. The US economy expanded by 2.6% after two quarters of negative growth.

The 8% advance in the S&P 500 was dwarfed by the 10.5% and 12.4% rallies in mid- and small-cap stocks. US Value significantly outperformed tech-heavy growth, up 10.4% and 6.1%, respectively. The bond market finished the month lower than September as yields rose.

Foreign stocks increased by 5.4% despite working through their own problems. The UK is on its 3rd prime minister in 6 months. The war produced extreme electricity and gas prices, resulting in another Eurozone inflation record. Heavy weighting in China was a primary factor in the emerging market’s 3.1% drop as their stringent zero-covid policy significantly hurt their economy and stock market. While October’s overall market performance was a welcome relief, there are still some soft spots in the data.

Earnings season and the S&P.

We are in the midst of earnings season with more than half of the companies in the S&P 500 having reported, and results exceeding Wall Street expectations. However, analysts set the bar problematically low. So far, 3rd quarter overall earnings growth of the S&P 500 is 2.3%, down significantly from the double-digit growth earlier this year. Strip out the energy sector’s 134% earnings growth and the number quickly turns negative. The earnings season’s most notable aspect is the high-profile misses among the mega-cap technology companies in the S&P 500. These once S&P 500 “darlings” are now a significant drag on the index.

Although the S&P 500 index is down around 18% this year, the average stock is down only around 10%. These “boring” companies that generate good cash flow with strong revenue growth and expanding margins are navigating this inflationary environment much better than the mega technology companies with declining growth rates and margins.

The Fed vs the economy.

The third quarter GDP report bucked the trend for the year as the economy expanded by 2.6%. The JOLT report showed October job openings beat expectations regardless of the Fed working to loosen up the tight labor market. This data reveals there are 1.9 jobs for every available worker, fueling wage increase in the employment cost index - a closely watched statistic for the Fed. The Fed policymakers’ preferred inflation gauge, the CPE, also ticked higher. Consequently, there are set market expectations for continued rate hikes through the end of the year.

Unsurprisingly, on Tuesday, November 2nd, the Federal Reserve raised rates by an additional 75bps. The market did not expect a clear signal from Jay Powell’s press conference that a pivot, pause, or rate cut wouldn’t be happening any time soon.

While the earnings and economic data suggest a base case for additional overall volatility, this market is primed for active managers who are diligently investing in companies with strong fundamentals. The market has seasonality on its side as November has historically been one of the strongest months of the year for U.S. stocks. In fact, the S&P 500 has posted a positive result nine of the past ten Novembers. 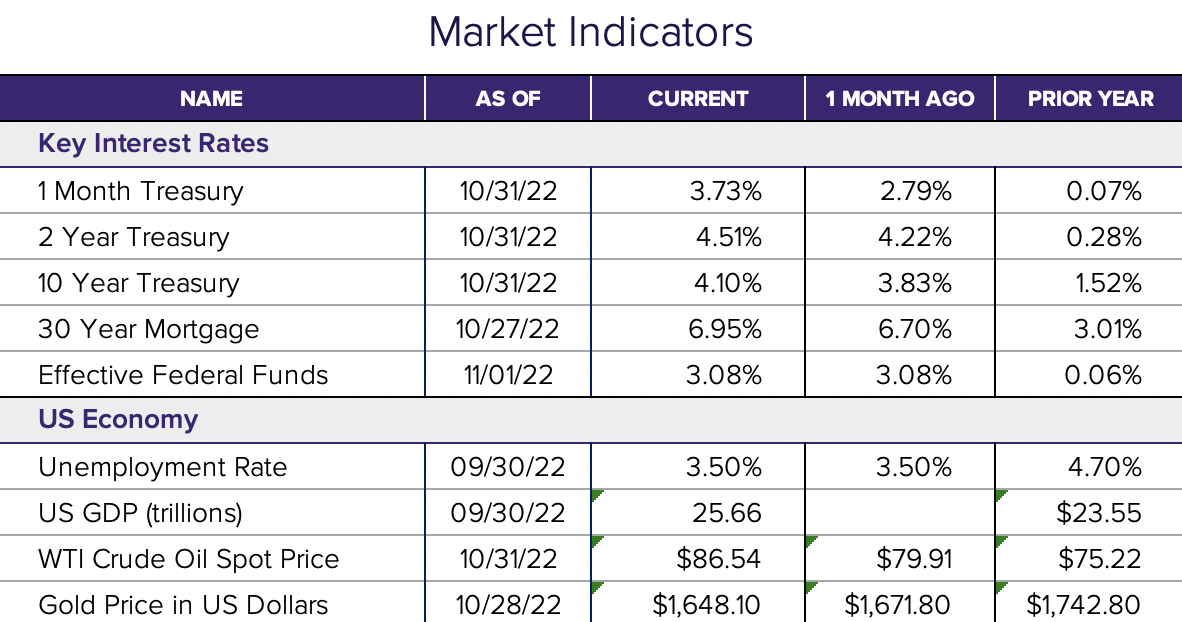