U.S. equity markets weren’t spooked this month as investors bought the September dip. The S&P 500 index treated investors to a 6.9% rise to close at an all-time high, wiping out September’s 4.8% slide. These gains came as quarterly earnings reports for U.S. corporations have come in mostly above expectations despite supply-chain challenges, the continuation of pandemic-era labor shortages, and ongoing inflation concerns. Globally, the Foreign Developed and Emerging Markets indices posted positive returns of 2.38% and .93% respectively.

The bond markets were a bit more alarmed as evidenced by the yield curve flattening in October. Short-term U.S. government bond rates jumped in response to expectations that surging inflation will force the Federal Reserve and other central banks to tighten monetary policy more aggressively.

The extreme imbalances between supply and demand resulted in the U.S. economy growing at its slowest pace in more than a year. GDP rose at an inflation-adjusted 2% annual rate in the third quarter, slowing from a 6.7% pace in the previous quarter and well below the 2.7% expectation. On the inflation front, U.S. consumer prices grew at a 5.39% annual rate, the fastest pace in recent years, and well above the longer-term average of 3.2%.

The American consumer is reacting to the continued expectation of higher prices evidenced by the increase in the consumer spending index, the PCE. The PCE index rose at an annual rate of 4.38%, up from 4% a quarter ago. Along with the reaction in spending patterns, consumer sentiment stayed at low levels in October signaling that their mood remained subdued amid the ongoing economic concerns.

In Washington, President Biden faced a trick AND treat of his own. The Senate treated him with bipartisan approval on his infrastructure bill, but the trick came from the House of Representatives when they halted plans for a vote on the bill. We will continue to keep an eye on the spending proposals in the coming weeks.

With less than 2 months to go in 2021, it’s unclear how the lingering wild cards will play out. Despite the uncertainties, the market is proving to be as resilient as a kid fighting the cold Buffalo weather in the spirit of trick-or-treating. 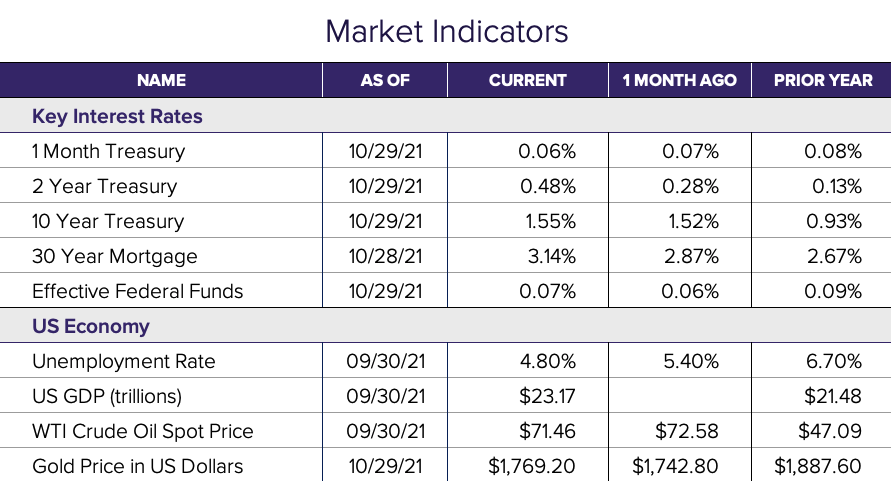