Don't call it a comeback.

November did not disappoint. Stocks were up. Bonds were up. That marks two back-to-back months of positive returns for the market. Key drivers behind the continued recovery were softer than expected inflation data, continued hawkish tone out of the Federal Reserve, and China’s easing COVID policies.

US stocks finished the month higher by 5.59% but were outshined by their foreign counterparts. Foreign-developed stocks were up 11.28% and emerging markets were up 14.85%. This was largely driven by a weaker than expected US inflation print, which led to expectations that the Fed might slow its pace of rate increases. This also led to a strong rebound in several major currencies against the dollar. The British pound peaked above 1.20 and the euro broke above parity with the greenback, ending the month at 1.04. The US bond market finished higher by 2.68% as yields dropped on the inflation print. Another notable event was the extreme pressure faced in the cryptocurrency markets thanks to the collapse and bankruptcy of FTX, a cryptocurrency exchange.

Earnings season and the S&P.

US inflation, as measured by the consumer price index, increased 7.7% year over year. This is down from 8.2%. Economists were expecting CPI to come in at 7.9%.

The Federal Reserve raised rates by another 0.75%— for the fourth consecutive time— to 3.75%-4.0%. After several comments from various Fed officials, the market is now expecting a slowdown in the pace of rate hikes to 0.50% for December.

In other news, China began outlining a plan for loosening its strict COVID policies. This significant reversal led to a surge in their stock, bond, and currency market.

While November was a welcome relief for market participants, there are still several headwinds for the market to navigate. Hopefully, Santa’s sled can power through and deliver on his “Santa Claus rally” in December. 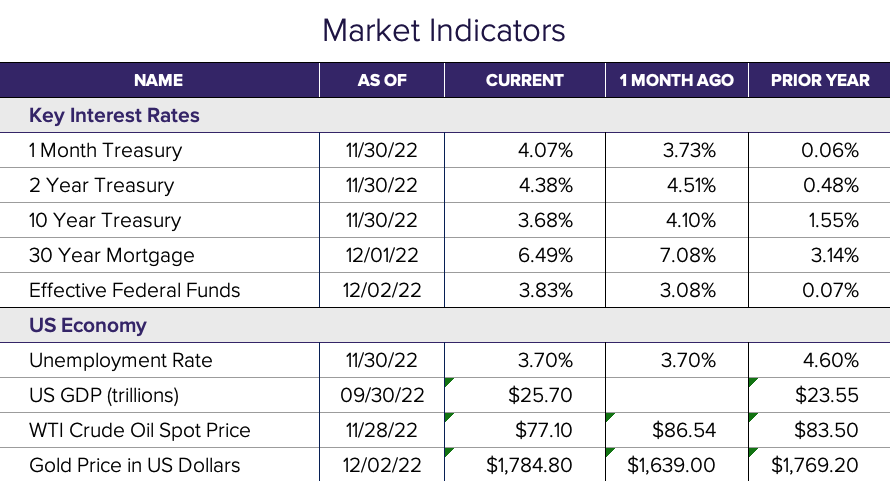