Get Out! Leaving New York State for Income Tax Purposes

New York State residents have some of the highest state and local tax burdens in the nation. After evaluating what they pay in property taxes, income taxes, sales and excise taxes, and other various transfer taxes and fees, it’s no wonder that more and more residents are exploring a move to a state with lower overall tax burdens such as Florida and Tennessee.

Additionally, people who spend time in New York State for work or leisure are more concerned than ever to make sure that they don’t unknowingly become residents of the state for income tax purposes.

This article explores some of the factors that trigger NYS residency for income tax purposes and outlines important considerations to think through if you are planning to leave New York State to avoid costly taxation in the future.

Are you a New York resident for tax purposes?

Two things can cause NYS residency for income tax purposes – your domicile or statutory factors. Let us examine both determinations. 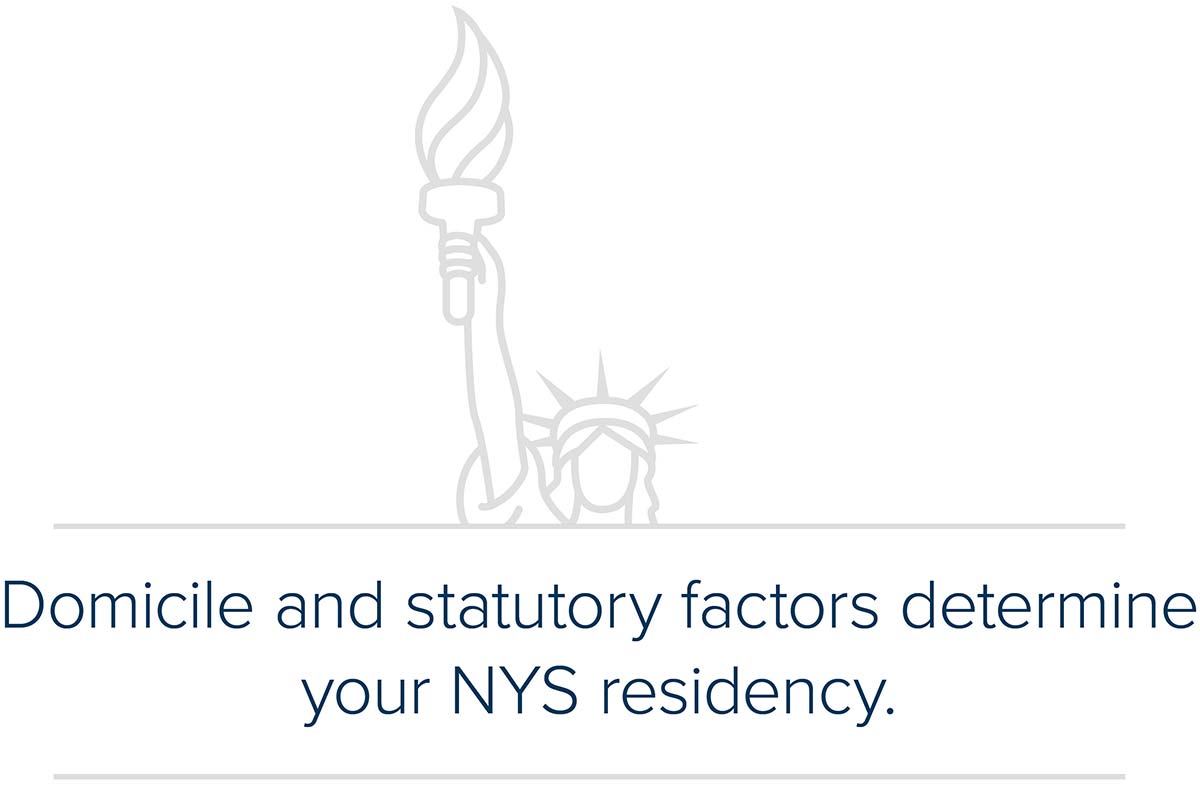 Domicile considerations are the qualitative, “gray area” factors that effectively establish a state as your true home. Think of the word home in its most traditional form when it comes to determining your domicile – the place where you have established roots of family and friends, as well as where your resources for health, finances, and education are located. How this applies to minor children can be critical in evaluating where your true domicile is located.

The size and scope of your various residences and where you keep your near-and-dear possessions are key considerations when it comes to evaluating where your domicile is established. Your domicile is typically the place you intend to come back to after a vacation or long absence. After thinking through these considerations, ask yourself if your domicile is your 4,000-square-foot, long-time family home, where all of your family heirlooms and important documents are located, or your 1,000-square-foot condo in Florida that is just large enough for your visits and has very few of the trappings of your everyday life. The domicile answer, whether we like it or not, is usually fairly clear when you evaluate these various factors objectively.

Certain things provide supporting evidence of your domicile, such as where you are registered to vote, your driver’s license, and perhaps where property tax exemptions and credits are applied (i.e., STAR exemption because it can only be claimed on your primary residence). Where your daily mail is received and where your legal and financial documents are addressed to can also be contributing factors in identifying where your true domicile is. 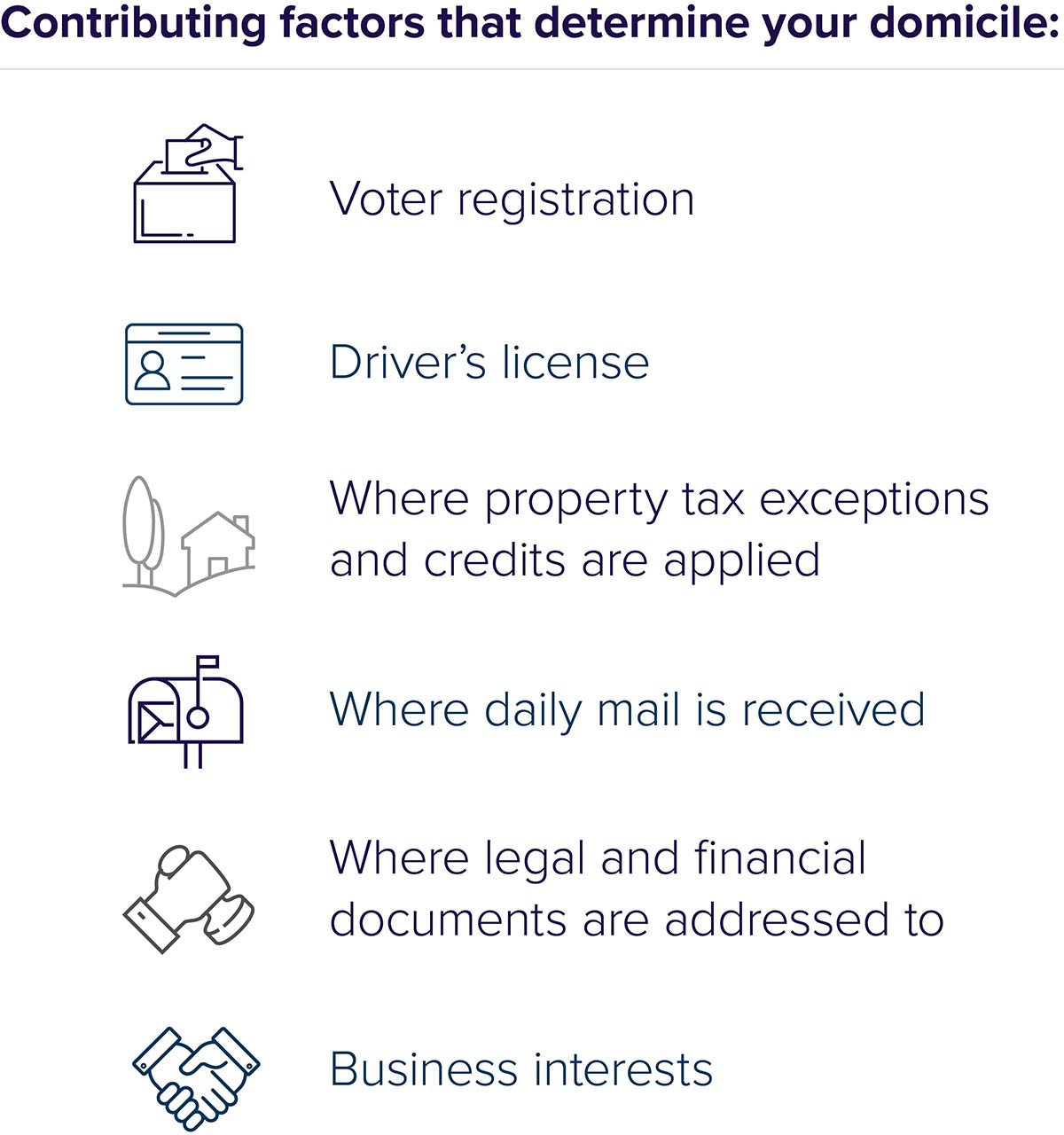 Finally, current business interests can also weigh heavily on establishing where one’s domicile is located. Although technology has made conducting business remotely more efficient and effective, most business owners and key employees tend to live and spend a significant amount of time in and around the business locations that are essential to their role or function within the operation. While this is just one of the many contributing factors when it comes to determining domicile, it can be an important one.

Individuals who spend significant time in multiple states for various reasons may have qualitative factors supporting domicile in each of those states. To assert their domicile, they must align their supporting factors to the location that they have the clearest and strongest connection. This is also an instance where the dreaded dual-residency scenario may rear its ugly head (residency established by domicile in one state and statutory residency in another state).

Typically, a change in domicile is precipitated by a life-changing event, such as a divorce, retirement, work relocation, or a true cut of all ties with a state (i.e., selling your main home and not having any other permanent place of abode to return to).

While time spent in New York State contributes to the statutory residency test (discussed next), general time spent in other various states (and outside of the country) as compared to NYS is a contributing factor to determining domicile, especially if your domicile was previously established in New York.

Statutory residence is a bright-line test defined by the laws of a state. NYS defines statutory residency as someone who spends greater than 183 days in New York and maintains a permanent place of abode in the state.

A permanent place of abode is any type of dwelling or structure that is suitable for year-round usage, and to which you have unfettered access. You don’t necessarily need to own the residence either. For instance, if your company has a corporate apartment that they allow you to stay at, or a relative allows you to stay long term in their home, each may qualify as a permanent place of abode.

A day in NYS is effectively a moment of physical contact with the state. For instance, if you fly into New York on a Monday evening, conduct a business meeting on Tuesday, and leave first thing Wednesday morning, that would count as three days in New York State toward your statutory residency count. Medical travel and connecting travel (i.e., a layover) notably do not count toward statutory residency days.

New York is very aggressive in tracking your days spent in its state. For instance, in state residency cases they will look at cell phone records (including pings), credit card and ATM usage location records, flight logs and toll records, landline usage, and other unique factors in addition to traditional calendars to establish where you actually spent your time.

Commonly referred to as the 11-month rule, the first exception is if your domicile is NYS but you meet all three of the following conditions, then you are not a resident for income tax purposes:

The second exception to the residency rule applies when NYS is your domicile but you meet all three of the following conditions. In this instance, you are not considered a NYS resident for income tax purposes.

If you are planning to leave New York and establish your residency in a different state, it is important to accurately document the date you left NYS and to record your days spent in each state throughout that year. To effectively change residency, the taxpayer must be able to demonstrate that they have established domicile in their new state. The taxpayer should establish new “roots” in the state they are claiming domicile in (i.e., obtain a new state driver’s license, doctors, banking, voter registration, etc.). If the taxpayer continues to maintain a place of abode in NYS, they should move all of their most valuable possessions to their new primary residence in the new state. They should also cease taking any STAR exemption for property taxes on their NYS house.

It is the taxpayer’s responsibility to prove that they are not or no longer a NYS resident. Taxpayers who assert that their NYS domicile has ended should be proactive in gathering documentation to avoid any issues in the event of a residency audit.

After reading this article, it should be rather clear that determining residency for New York State income tax purposes is not as simple and straightforward as one might think. In addition to simple math and counting of days in the state, there are important qualitative factors that might trigger New York State residency. It is in this gray area, coupled with the aggressive and intrusive counting of the true number of days spent in the state, that NYS auditors have built a successful track record of defending the state tax coffers.

If your personal situation falls in this gray area or your days are close to triggering statutory residency, it is important to work with an experienced tax advisor or attorney to successfully report and effectuate your transition to another state.