Exploring the Cutting Edge of Digital Data and Asset Technologies

On February 13, 2022, the company Crypto.com paid handsomely to run a commercial during Super Bowl LVI. Featuring Hollywood star Matt Damon and promoting their cryptocurrency market, the advertisement opens with the line, “History is filled with almosts” and ends with “Fortune favors the brave.” With 112.3 million people watching the game, this is the moment that, in my opinion, cryptocurrency fully entered the mainstream.

We first heard about Bitcoin, blockchain, and cryptocurrency in 2009. Since then, we’ve seen these terms in countless headlines. More recently, the IRS issued tax guidance on virtual currencies, and Fidelity was the first retirement plan provider to add Bitcoin to 401(k) offerings.

Despite its exploding popularity, there is still much confusion regarding cryptocurrency and blockchain, especially within the investment space. So, earlier this year, I set out to get a fundamental view of this new asset category by enrolling Blockchain and Digital AssetsSM certificate course from the Digital Asset Council of Financial Professionals.

Before diving into the course’s top lessons, let’s revisit the (in)famous Crypto.com Super Bowl ad. When Matt Damon encouraged us to bravely invest in cryptocurrency, the price of Bitcoin was around $65,000. Today, it’s trading at around $20,000.

The first lesson of the course was that Bitcoin and blockchain are not equals. In the simplest terms, blockchain is the technology, while Bitcoin (and other digital assets) are applications built on this technology. 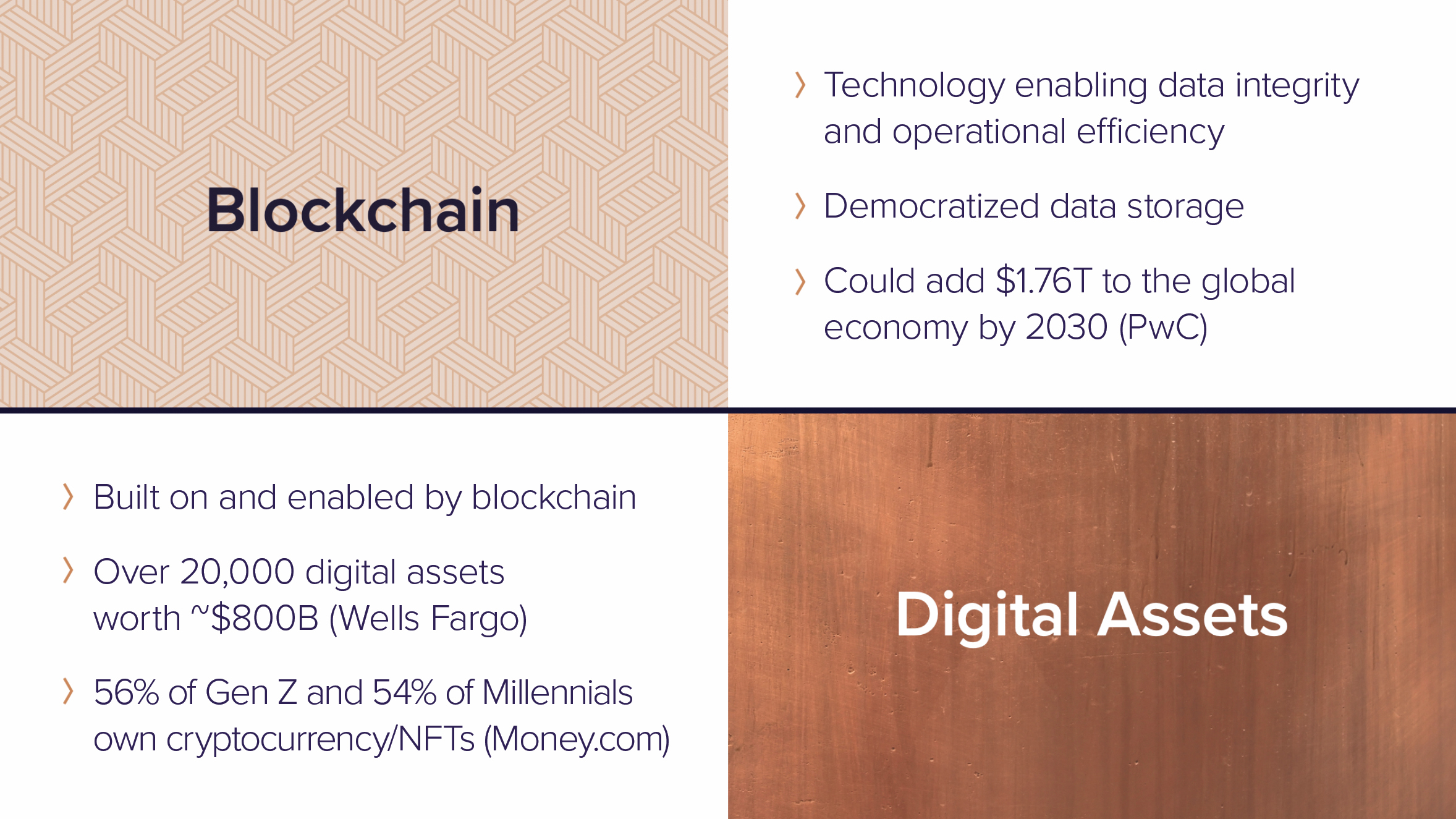 Blockchain is a distributed ledger of data that was created by Bell Labs back in the 1990s to maintain and track transactions. With blockchain, data aggregates linearly, so new transactions are turned into new blocks linked to the previous one. What’s really important is that no one can edit a block that is already on the chain, which creates transparency in all transactions. This technology allows for excellent data integrity, operational efficiency, and democratized data storage.

To better understand how blockchain works, a good analogy is a housing deed, which is a chronological ledger of transactions that can’t be edited, just amended. That’s similar to how blockchain operates, only with digital data.

The applications for blockchain are incredibly exciting. As adoption increases, the technology will impact capital markets, finance, supply chain, food distribution, medical record keeping, and more. You may even already rely on blockchain if you send money to family and friends through Venmo. By 2030, the technology could add $1.76 trillion to the global economy, according to PwC.

Now let’s turn our attention to Bitcoin, which is a digital asset built on and enabled by blockchain. Bitcoin was introduced in 2009 by a writer going by the name of “Satoshi Nakamoto” (the true author or authors of this white paper are unknown). In the wake of the 2008 housing market crash, the intention of Bitcoin was a decentralized digital currency that would securely enable peer-to-peer transactions.

The value of Bitcoin is demand-driven, as only 21 million coins can ever be in circulation. There are two means of acquiring Bitcoin: purchasing or mining. Essentially, mining is completing complex mathematical calculations that validate transactions and add data blocks to the chain. In return for participating in the foundation of Bitcoin, the miner is rewarded with valuable coins. In theory, as mining demand increases, the calculations become more challenging.

Over the past few years, mining activity has skyrocketed, requiring more advanced computers and higher energy consumption to crack the calculations. If the Bitcoin network were a country, it would be the 30th biggest power-consuming nation in the world. So, while Bitcoin is entirely digital, it is not exactly environmentally friendly—at least in its current form. You can buy “green” Bitcoins that were mined with renewable energy, but they will cost you a premium.

Lesson #2: Cryptocurrency is not currency.

The term cryptocurrency is a misnomer for several reasons. It is dissimilar to fiat currency, which is issued by a government monetary authority, accepted by the public as a medium of exchange, backed by the Federal Reserve, and stable as a store or value.

In comparison, cryptocurrency is rarely accepted for payments. It is not backed by any asset or organization, and it is highly volatile and unpredictable. In May 2022, Tether broke the buck (meaning its value dipped under $1.00) even though as a stablecoin, it was supposed to be tethered to $1.

Finally, the IRS views crypto as property, not currency, which can have surprising tax consequences for those selling their Bitcoin at a profit.

Now that we’ve established Bitcoin (and others) as a digital asset rather than a currency, let’s consider it as an investment. When compared to traditional asset classes, Bitcoin is off the charts—and not always in a good way.

Bitcoin is notorious for whiplash swings in value. Over the past three years, we can certainly see the extreme peaks and values. 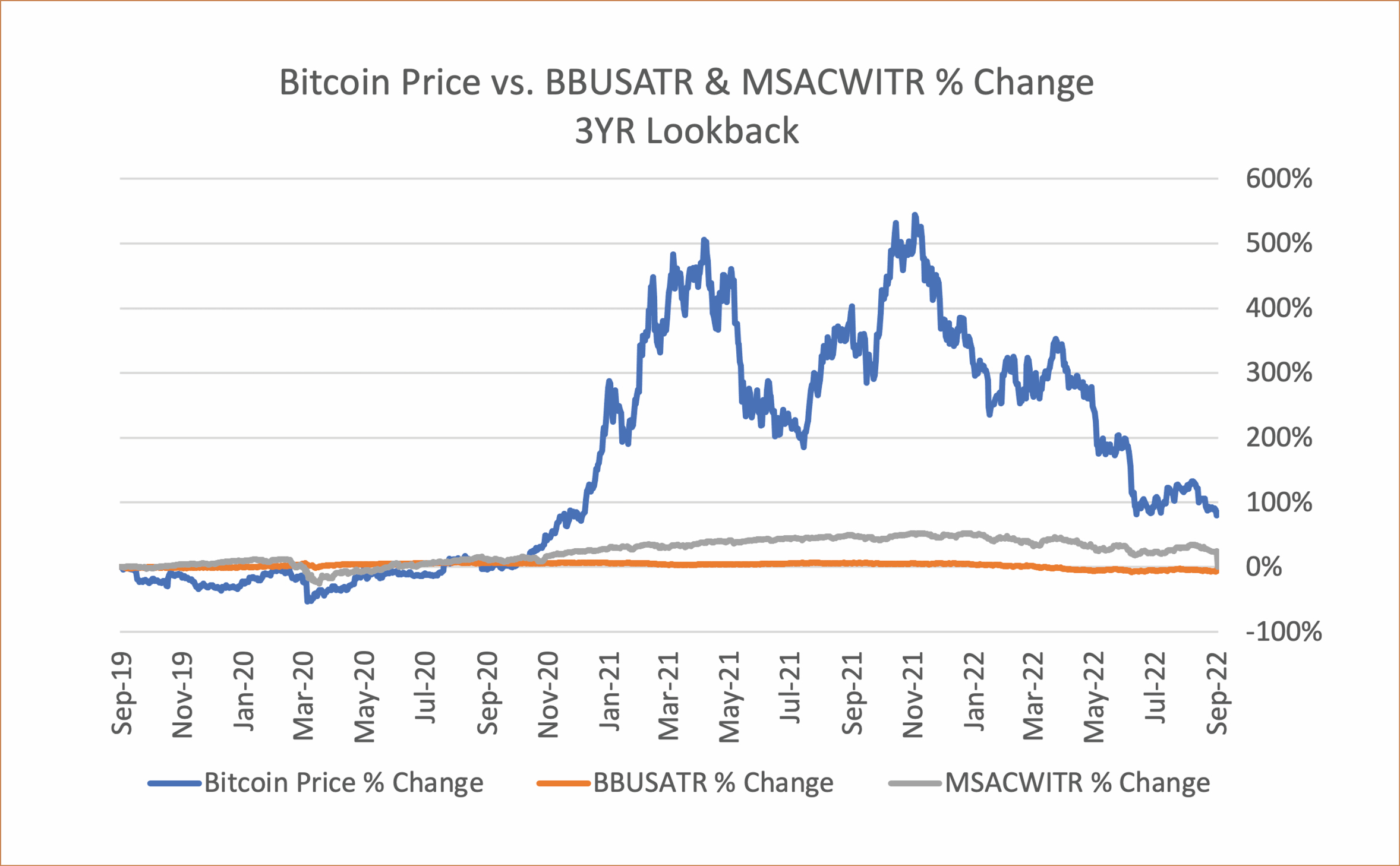 Here we have key investment metrics with a five-year lookback. What stands out to me is the difference in max drawn down—19.53% for Bloomberg US Aggregate Total Return, compared to 68% for Bitcoin.

When we look at price volatility risk, which is how much you can anticipate a normal movement, the stock mark has been around 15-16 for hundreds of years. Bitcoin is at 88, which is an astounding level of volatility. That means two-thirds of the time, it is normal for this asset to gain or lose 88%. Let’s be clear—some people have made a lot of money in Bitcoin. However, many more have lost money.

Blockchain is here to stay. It’s going to make lives easier and business better. Adoption will rise, and we’ll see the technology be used to create various forms of digital assets.

Long term, we expect drastic changes from blockchain. Digital assets will be fully accepted, though likely created and issued by fiat governments such as the Federal Reserve, Treasury, European Union, etc.

At Sanderson, we are skeptical of cryptocurrencies and digital assets from an investment standpoint. Still, we will continue to monitor and keep our wealth management clients on the cutting edge of emerging asset classes.