Close encounters in bear territory. How can the market recover?

Risky assets are off to a poor start in 2022. The U.S. Stock Market is in near bear territory (S&P 500 down 15%), foreign markets aren’t much better (MSCI ACWI ex USA down 13%), and Bitcoin is down 56% since its peak in November 2021. There’s a confluence of factors leading to this drawdown, some of which have no end in sight.

First, the Russo-Ukrainian conflict is lasting much longer than Putin intended and with much different results. The Federal Reserve has cautioned about transitory inflation since 2020 and still has its grasp on worldwide goods prices, peaking at 8.5% in March. The Federal Reserve has brought out its toolbox to help combat inflation by raising the Fed Funds Rate and reducing the Fed’s balance sheet. Additionally, inflation is further fueled by global supply shortages and a tight labor market, which is much more difficult and time-intensive to influence or control than monetary policy. These factors have attracted more international investment and bond purchases into the U.S., creating more demand for U.S. dollars and somewhat unexpectedly pushing the U.S. dollar index up to 10% higher than it was at the beginning of the year.

While this is the first sustained downturn in two years, it’s been very different. First, everything is not moving together. Some big drops from notable companies are pulling the indices down. Etsy, PayPal, and Netflix are at the top of the list for 2022 losers, all down more than 50%!

The drawdown in the S&P 500 has been relatively steady, with no real, meaningful spikes in volatility. 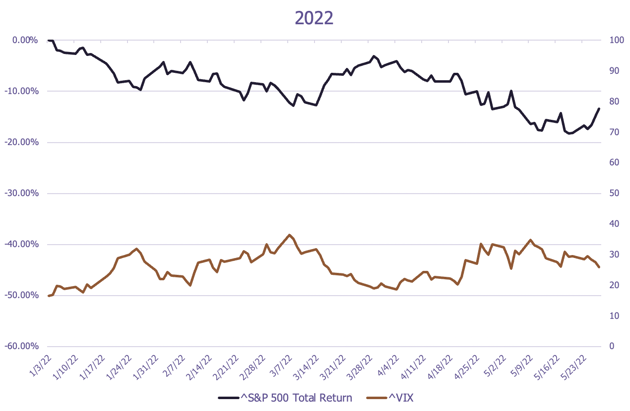 In comparison, during the last bear market throughout COVID 2020, we experienced the most volatile markets ever. 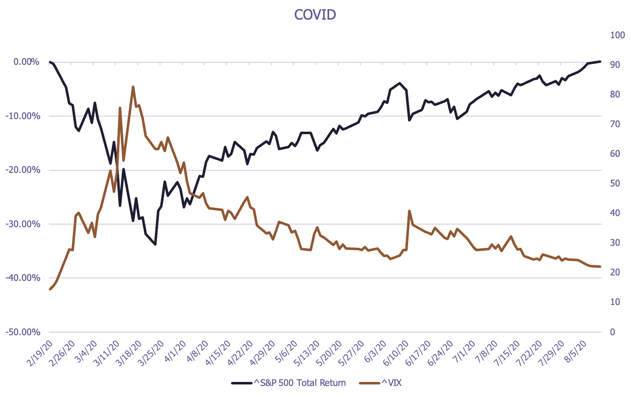 Additionally, compared to the 2008 Great Recession, we’re nowhere near the level of volatility we experienced then.

Truthfully, no one knows. The wall of worry is tall and strong, full of inflation, interest rates, supply chain, labor shortages, and vital U.S. dollars. We have a potential growing food crisis with nearly 25 million tonnes of grain stuck in besieged ports in Ukraine. We also have the U.S. election season right around the corner, with control of the House and Senate both on the line.

Even with all these worries, we’re starting to see resiliency in the market. What’s especially encouraging is the broad market reaction to disappointing financial results for companies just now reporting (Target and Wal-Mart).

There are a lot of risk factors on the table for the global markets today; however, they are known and priced into the market. It’s important to remember that the stock market is generally a leading indicator, dropping before recessions and then recovering during a downturn. Q1 GDP growth was -1.4%, and two negative quarters in a row is technically a recession; however, current Federal Reserve estimates peg Q2 GDP growth at ~ 2.0%. If inflation continues to moderate as it has in April and May, and the true peak was March 2022 at 8.5%, we may be in line for a much better second half of 2022.